Home ❯ What we care about ❯ Climate change and energy

The climate emergency is the biggest threat facing our countryside and planet. We need to drastically reduce our greenhouse gas emissions. But there’s good news: the countryside can provide many of the solutions.

CPRE promotes planting more trees and hedgerows, taking better care of our soils and restoring peatlands. These actually suck carbon from the air and store it in the ground. And we’re calling on government to speed up the move to renewable energy and to set a target date for phasing fossil fuels out altogether. CPRE Notts’ first outing of 2021 at Climate Festival in Grantham

An update on the proposed fracking site at Misson. 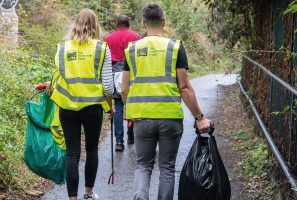 CPRE Nottinghamshire joined the campaign to prevent a relaxation of the planning laws – and we won!

We lobbied Notts MPs and local councillors and helped to stop the government’s plans to fast-track fracking through the planning system over the heads of local people. Fracking is bad for the countryside, local communities, and the environment. Sonic testing was even proposed for Clumber Park. The government has now dropped its proposals and halted fracking, but we need to be vigilant to see that it does not come back.

We made detailed representations to Nottinghamshire County Council about exploratory drilling at Tinker Lane, near Barnby Moor and Springs Road, Misson and secured some conditions to the permission to drill. The Tinker Lane drilling was unsuccessful and has been dropped. Although the Mission site has been cleared, it has not been restored and there are proposals to keep the site on ice. We have lodged our objection and will remain vigilant.